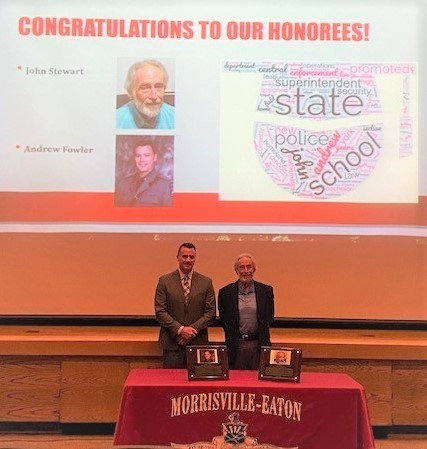 ​Morrisville-Eaton Inducts Two Alumni to the Wall of Fame

The Morrisville-Eaton Central School District inducted two distinguished alumni into the 2022 class of its Wall of Fame. This year’s inductees – Andrew Fowler and John Stewart were recognized during an October 1st ceremony. The ceremony was prior to the Homecoming football game. During halftime, there was recognition of the two inductees. Thank you to everyone who joined us for the events.

The MECS Wall of Fame was established to recognize outstanding alumni who have achieved distinction in their lives and chosen fields through significant contributions to their careers and community or personal achievements. This honor is meant to stand as a model and incentive to current and future students, and to recognize the foundation that a quality public education at Morrisville-Eaton played in each recipient’s success.

Nominees are eligible if they have:

To nominate an alumnus for this distinction: complete a nomination form, which is available on the district’s website and at both buildings. The nomination period will be open during the school year, until June 30th, for the following October inductions.  If you have any questions, please call the District Office at 315-684-9300.

Bachelor of Science in Mathematics, Master of Science in Mathematics Education, and Certificate of Advanced Study in Educational Leadership 1973, 1974, and 1988 all from the University at Albany. John began his teaching career in 1974 at “The Best School by a Dam Site,” Gilboa-Conesville Central School, teaching math in grades 7-12. In 1983-85 he became K-12 principal/assistant superintendent, then left to become Superintendent of Schools at Keene Central School, in the “Home of the High Peaks,”, staying for 5 years. He moved on to be Superintendent of Schools at the “Home of the Tornadoes,” Poland Central School, where he remained 17 years until retirement in 2007. In addition to work, John enjoys travel, live music, golf, reading, and family. John married his high school sweetheart, Terri Upton, a M-ECS class of 1971 graduate, in 1974. They have two sons, John and Eric, and four grandchildren Sydney, Caden, Chelsea, and Jonathan. Outside of school, John is active with the Kuyahoora Valley Rotary Club and the Golf Club of Newport Men’s League. Terri and John enjoy spending their winters in Myrtle Beach, South Carolina. Thank you M-ECS!

Bachelor of Arts in Communications Studies from SUNY Cortland 2001. In January 2002, Andrew joined the New York State Police and was initially stationed in Oswego County before returning to the Morrisville area. After seven years as a Trooper out of the Morrisville station, Andrew was promoted to sergeant and was transferred to Lake Placid, New York, where he would spend the next two years. In 2011, Andrew relocated to the Albany area and was later promoted to Sergeant-Station Commander at the New York State Police Forensic Investigation Center. In 2018, Andrew was promoted to Lieutenant and assigned to the Planning and Research section in State Police Division Headquarters. In 2019, Andrew was selected to attend the FBI National Academy in Quantico, Virginia. The FBI National Academy is a 10-week training program consisting of 250 law enforcement leaders who work to improve law enforcement standards, knowledge, and cooperation worldwide.  In 2021, Andrew was promoted to the rank of Captain and is currently assigned to the Field Command – Uniform section of the New York State Police. In this position, he assists the Deputy Superintendent – Field Command with daily operations and the coordination of emergency operations in the event of statewide incidents including winter storms, natural disasters, acts of terrorism/homeland security, and manhunts. Additionally, Andrew acts as the State Police Superintendent’s representative on the New York State School Safety Improvement Team. This team is a collaborative effort of the State Department of Education, the Executive Chamber, the Department of State and various other state entities, who discuss and implement measures that keep New York’s over 3,000 school facilities safe. Andrew’s staff oversees the collection of each public school and BOCES Building Level Emergency Response Plan, while ensuring these plans are properly disseminated to other law enforcement agencies throughout the state. Andrew also currently serves as the program manager for the New York State Police State Homeland Security Grant and serves on the State Homeland Security Senior Advisory Committee. In his community, Andrew has been a volunteer assistant coach for the Scotia-Glenville youth football league for the past several years. Andrew and his wife Heidi live in Glenville with their two children and dog.